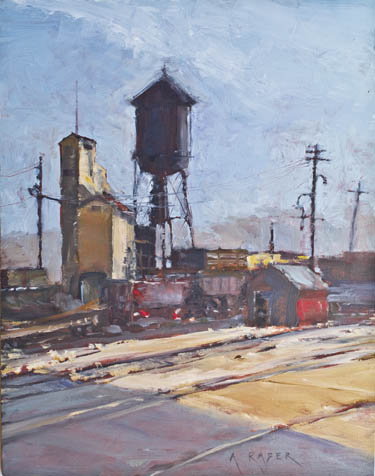 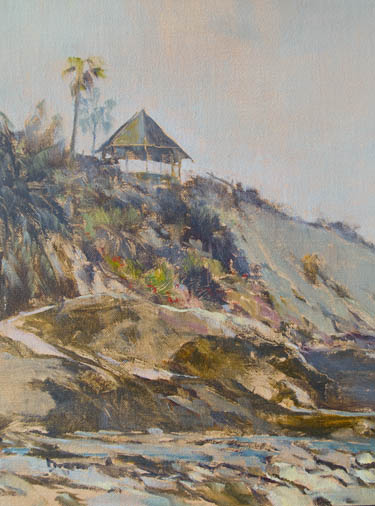 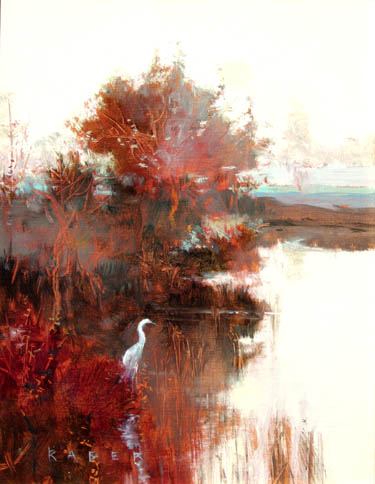 The term "Plein Air Painting"  (rather than "Plain Air Painting", as it is sometimes misspelled) is fairly new, although it refers to a very old tradition of painting landscapes in real-time, in the environment itself.  The French term Plein air is literally rendered as "Open Air" in English.  In fact, if one searches for the term Plein Air on the web one might pick up as many reference to campgrounds in France as landscape oil paintings.

The term Alla Prima is becoming more frequently used in reference to Plein Air painting.  Alla prima means working from life.  In the case of a landscape, it would be working from the live environment en plein air.  Alla prima may also be used to refer to portrait painting, or any other painting where the painting is composed from the actual subject rather than a photographic representation of the subject.

Sketches and engravings from over 500 years ago show painters with small easels set up outdoors working on studies.  These studies would later be taken to the studio where they were finished.  The invention of photography, its simplicity and immediacy, has lead many artists to abandon not only the complications of hauling their canvases, easels, brushes, and paints all over the countryside, but also the freshness of vision, color, and light of painting on the spot.  Digital photography has tended to speed the process of doing more studio work and less field work.  Fortunately,  art supply houses have counterbalanced this somewhat by making better, sturdier, and lighter field equipment today.  Although not particularly elaborate, I have my field equipment down to approximately 12 pounds that can be rolled or carried over rough terrain.   Only a minority of scenes can be driven to.  Most often painting en plein air requires moving the equipment far enough from the road to require thought be put into how it is stored and organized.

The French Impressionists - Monet, Sisley, Pissaro - brought plein air painting to a new height, changing it from a method of producing a sketch for a later finished work to a method that produced a finished painting in the field. Monet was known to take several canvases out in the landscape with him, working on each for 30 to 45 minutes, until the light had changed, then taking the next canvas and painting on it for 30 minutes or so, and on to the next. He repeated this rotation process for several days running until the paintings were complete.  Even today plein air painters return to the same spot on subsequent days to complete the piece.

Plein Air Painting to one artist may mean completing a work in one sitting.  To other artist, it can mean starting the work in the field, and the adding finishing detains in the studio.  In the latter case, the plein air work is used as it has been in the past, as preparatory work for a large painting.    I use a diversified approach in my work.  Some of the pieces here were created in as little as two hours of very intense field work.  Others were started in the field as a study, and finished in the studio.  Others were thoughtfully captured by natural light photography and later rendered in the studio.  It would be hard for anyone but the artist to detect the method used for a given painting.

Southern California has been an important world center for Plein Air painting since the late 1800's.  The weather and the light, combined with beautiful coastal valleys contributed to this trend. Lack of mesquites may also have also contributed to the popularity of this place.   Southern California is conducive to painting outside almost every day of the year.  New England painters, by contrast,  have been known to tie their canvases to trees in snow storms and half freeze to achieve masterful paintings. Thanks to bug spray the Southeast is beginning to reveal itself to the plein air painter and, through them, to the rest of us, in the form of color, light, and shape on canvas.

Oil Painters of America was founded in 1991 primarily to focus attention on the value of fine drawing, color, composition and the appreciation of light. Throughout the 70's and '80's curricula in American educational facilities rarely focused on representational oil painting. The avant-garde has taken over since the 1960s. While OPA had no quarrel with abstract art, members were also witnesses to the undeniable fact that Americaâ€™s great art museums were almost totally lacking in the presentation of contemporary great masters of representational oil painting. OPA became the voice for renewed understanding and appreciation of representational art. Though there have been many national watercolor and pastel societies, OPA is the first national organization to be established for the sole purpose of representing traditional, representational oil painters. OPA membership currently stands at 3,400 artists. April has been honored with a signature membership in OPA.

Laguna Plein Air Painters Association was founded in 1996 by Saim Caglayan with help from co-founders Ken Auster, Jacobus Baas, Cynthia Britain and John Cosby. Primary motivation for the formation of LPAPA was to link the strong plein air movement of the early California painters to the present ones and to create a bond amongst the contemporary plein air painters throughout the nation.  April Raber is also a signature member of the Laguna Plein Air Painter's Association.

This page contains information on the following topics: